In 2017, a study entitled The Geography of Prosperity created a Vitality Index for the United States combining median household income, poverty rate, life expectancy, prime-age employment (25-54), housing vacancy rate, and the unemployment rate. According to the study’s findings, growing gaps in economic growth exist between states and between counties within states.

Table 1 compares the indicators for Arkansas and the United States. Arkansas’ Vitality Index score is significantly lower than the national average and ranks among the states with the lowest Vitality Index scores. The state has a shorter life expectancy that the US, a lower median income, and a smaller percentage of people between the ages of 25-54 working. Poverty and housing vacancy rates in Arkansas exceed the national average.

The interactive map on Figure 1 shows the Vitality Index score (orange to blue scale) and population density (how light or dark the colors are) for the entire state. While the majority of Arkansas counties are in the lowest category, Benton and Saline are in the highest.

Table 1: Vitality Index score and indicators for the United States and Arkansas (2017)

Table 2: Vitality Index score for the highest and lowest ranked counties in Arkansas (2017) 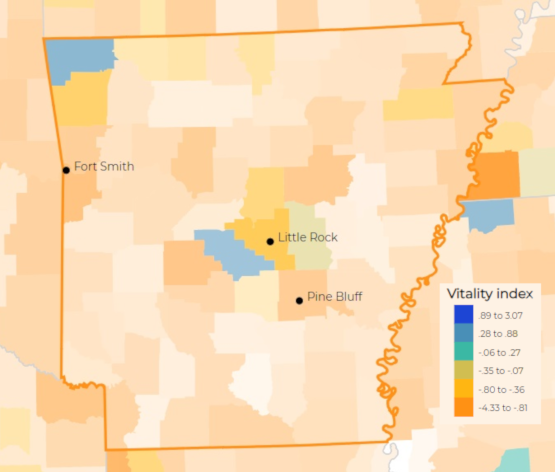 References:
The Geography of Prosperity
An interactive exploration of the geography of prosperity