Graph 1: Mortality Rate in the United States and Arkansas by Race, 2018 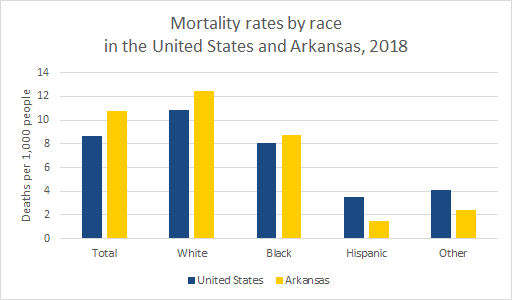 Arkansas’s mortality rate for 2018, and the rates specific to Black and White residents, exceeded the national average. In contrast, mortality ratios for Hispanics and other ethnic groups in the state fell below the US rate. In part, these results are a reflection of age differences between Arkansas and the country as a whole. While the state’s Non-White residents are younger, White residents are older than the White population nationwide and form a higher percentage (76.7%) of Arkansas’s overall population.

Map 2: Average Mortality Rate for the White Population of Arkansas by County (2017-2019)

Map 2 shows that Benton County’s mortality rate of 8.89 is the lowest for the state’s non-Hispanic White population, and Monroe County’s ratio of 20.92 is the highest. Counties with the highest mortality rates for White residents are in the Delta and southern parts of the state and several counties in north-central Arkansas, clustered around Fulton County, a popular retirement area.

Map 3: Average Mortality Rate for the Black and African American Population of Arkansas by County (2017-2019)

Mortality rates for the state’s Black residents, shown in Map 3, range from 2.12 in Benton County to 16.11. in Calhoun County. Counties with the highest mortality rates are concentrated mostly in the Delta and Southern regions of Arkansas. Many of these same counties have relatively low median incomes.

Map 4: Average Mortality Rate for the Hispanic Population of Arkansas by County (2017-2019)

Hispanic residents have low mortality rates compared to the other population groups in Arkansas. The low ratios for Hispanic residents, which range from 0.39 to 6.32, according to Map 4, are probably linked to the fact that the state’s Hispanic population has a median age of about 25 and represents just 7.5% of the total population.