AEDI’s Data Center has created a series of Tables detailing Arkansas’s estimated life expectancy and mortality rates for 2019. The Institute used data from the Arkansas Department of Health (ADH) that draws on death certificates from the International Classification of Diseases and population estimates from the U.S. Census Bureau to present estimates by age, gender, and race. 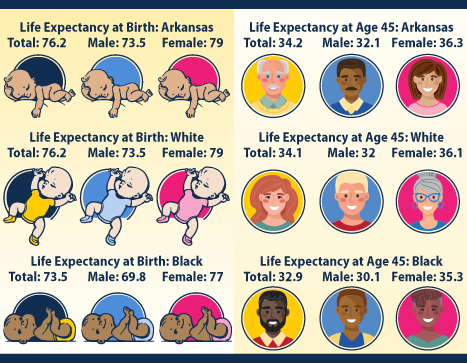 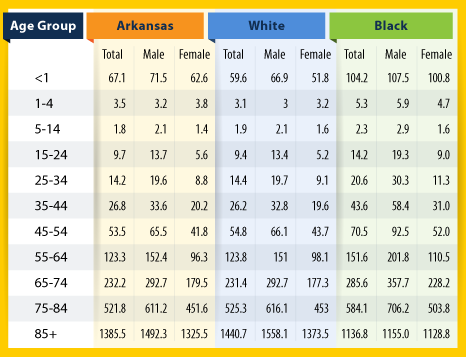 Table 2 shows the age-specific mortality rates (per 10,000 people) used to calculate the life expectancy by age, race, and gender for Arkansans in Table 1. Mortality rates for all groups start at an elevated level for children under 12 months, drop to their lowest level for children between the ages of 5-14, then increase steadily with each age grouping. Higher life expectancies for women are no surprise considering that females in the aggregate have lower mortality rates in every age group except for children between the ages of 1 and 4.

In every category except for residents age 85 and above, Black Arkansans have substantially higher mortality rates than Whites. The most significant disparities are children under 12 months old and children between 1 and 4 years old, and adults in the 45 to 54 age group. Mortality rates for Blacks in these categories range 65% to 75% higher than Whites, while also running markedly above Whites in other groupings, including 51% in the 15-24 age group.

These disparities continue when comparing both racial groups by gender, with Black males and females having higher mortality rates than their White counterparts in ten of eleven age groupings. This trend is starkly apparent in the earliest stage of life, where mortality rates for Black males in Arkansas are 98% higher than White males and 94% higher for Black females than for White females. The one exception to this pattern is the mortality rate for residents 85 and older, which is 21% lower for Black Arkansans than White Arkansans.

These tables were produced from period life tables available here.