People who are not part of the labor force, usually individuals between the ages of 0 and 14 or those 65 and over, are classed as dependent populations. Comparing the size of the dependent population in rural Arkansas to the labor force that supports them indicates the dependency ratio. The ratio, in turn, is critical to determining the level of financial stress on the rural working population of the state. 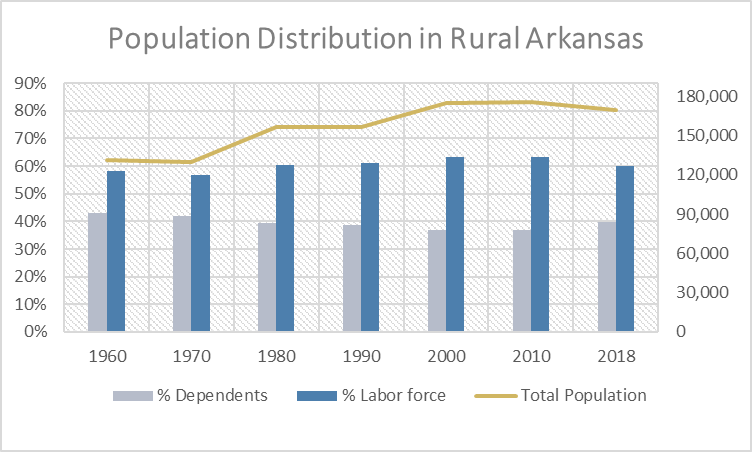 This could be considered a positive trend since it shows a decrease in the number of dependents relying on the labor force, but this cannot be assumed since Table 1 does not reflect fluctuations in the population of children and senior citizens. 2010 to 2018 saw a 3% decline in the population of the state’s rural counties and a 3% increase in the percentage of dependents compared with the overall labor force, a reversal of the slow decrease evident between 1960 and 2010. 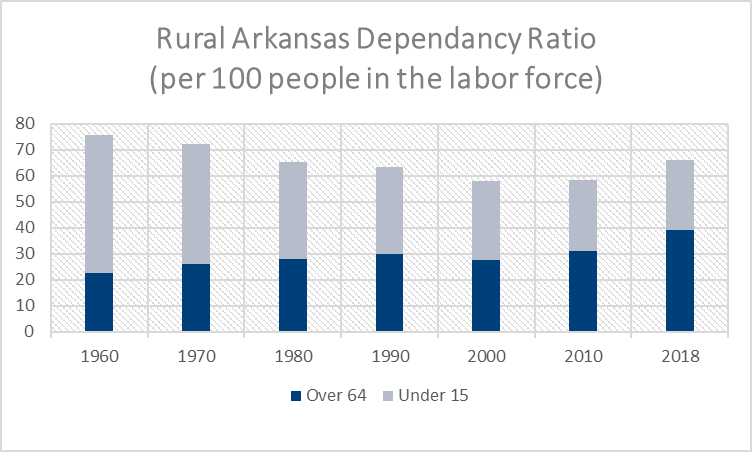 Table 2 shows the number of people considered dependent (over 64 or under 15) for every 100 persons in the workforce. Consistent with the trend shown in Table 1, the ratio of dependent individuals for every 100 people in the workforce between 1960 and 2010 decreased from around 76 to 58. The increase in the percentage of dependents in rural Arkansas between 2010 and 2018 is also reflected in in the number of dependents per 100 persons in the labor force which jumped from 58 to 66.

Table 2 also shows a steady decrease in the younger share of the rural population accompanied by a general increase in the number of older residents. Since 1960 the ratio of dependent adults has nearly doubled from 23 to 39 per 100, while the ratio for dependent children decreased from 53 to 27 per 100. 2010 is the first time in 50 years that the adult dependency ratio (31 per 100) in rural Arkansas exceeded the child dependency ratio (29 per 100).

This recent shift should be closely monitored since a drop in the number of young people entering the work force coupled with an increase in older people exiting it will place more pressure on the work force sustaining both groups.