Two weeks ago, the Census Bureau announced that the deadline for finishing the 2020 Census Operations, delayed initially to cope with the coronavirus outbreak, will be rescheduled from October 31 to September 30. This sudden change has forced the Bureau to re-plan, shorten, and cancel some of its scheduled operations.

Time allotted to the Non-Response Follow Up (NRFU) project, which sends census takers to housing units that failed to respond to earlier queries, has been reduced from three to two months. This change will almost certainly reduce the number of Arkansans counted since the time allowed census workers to visit households and conduct follow-ups is significantly shortened. Phase two of the Count Review Operation, which ensures the accuracy of counts in group quarters like colleges and nursing homes, has been canceled altogether.

These and other programs are primarily aimed at ‘hard to count’ populations challenging to reach and reluctant to respond to census questions. Often dependent on large scale federal social programs for assistance with medical expenses, food costs, housing, and education, these groups include people with lower incomes, racial and ethnic minorities, rural residents, immigrants, and children. Since census numbers determine funding levels for these programs, any undercount adversely affects the welfare of those in underrepresented communities.

In 2016, according to the George Washington University Institute of Public Policy, Arkansas received close to $9.9 billion in federal funds distributed through various Federal programs, including Medicaid, SNAPS, Pell Grants, the National School Lunch Program, and different housing initiatives. This figure, taken from the 2010 Census count, equals approximately $3,300 per resident for each year from 2010 to 2020. Since the census bureau estimates an average of 2.5 residents in each housing unit, a single uncounted housing unit deprives the state of $8250 in federal funding. 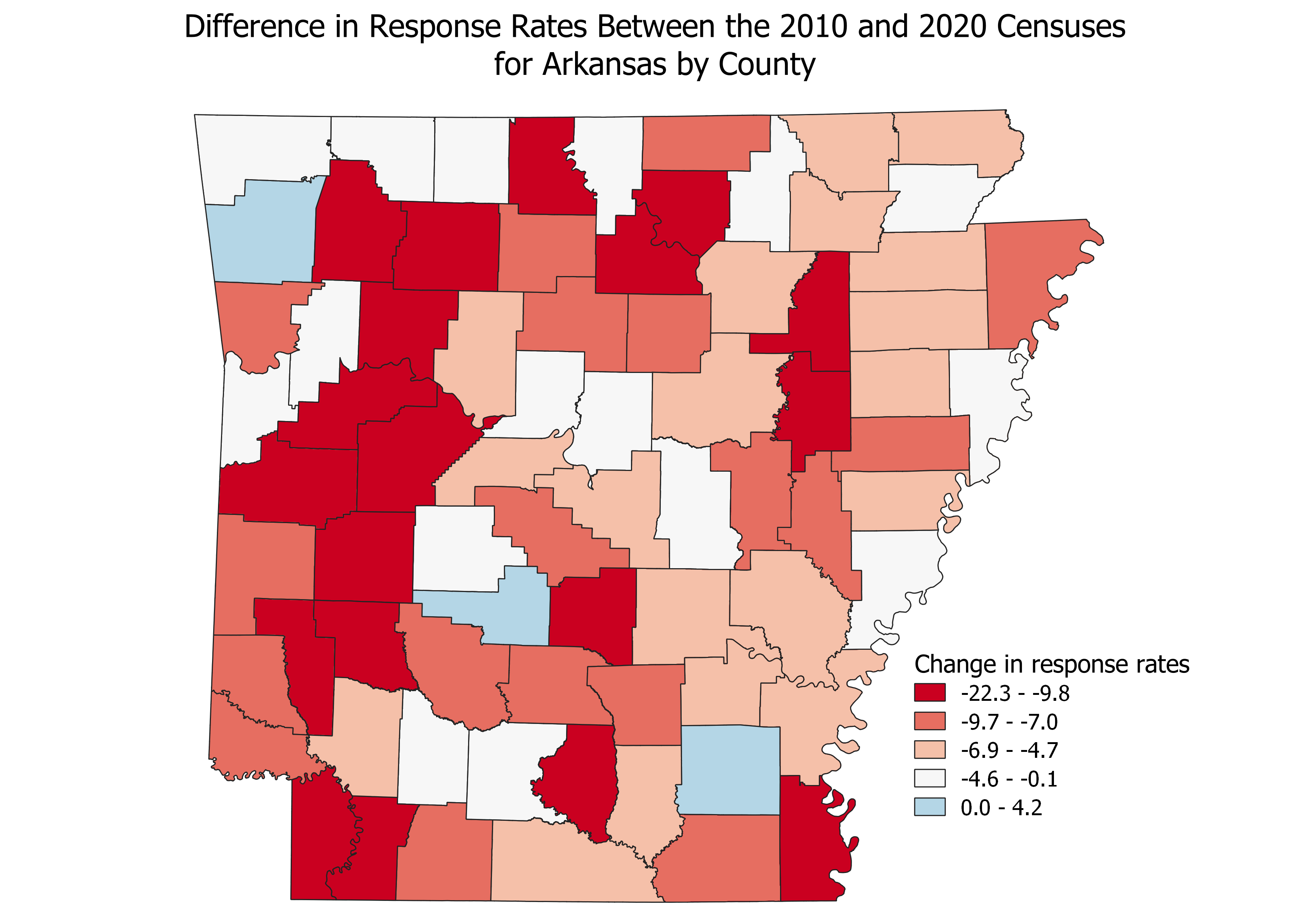 Before the NRFU project’s launch last week, just over 890,000 housing units or 58.3% of the 1.5 million housing units in the Census Bureau’s address file for Arkansas have responded. This percentage compares unfavorably with the 62.3% self-response rate for the state in the previous census, particularly since the current census offered two participation options unavailable in 2010. Table 1 shows only three counties with better response rates than the last census and only 16 counties, almost four percentage points shy of their 2010 performance. A single percent undercount, equating to just 30,000 people, would cost the state $990 million in lost funding over the next ten years.

The new time constraints will not automatically result in serious undercounts if the pace of reporting rates improve. The Bureau, census supporters, and stakeholders like the Arkansas Counts Coalition are redoubling their efforts to ensure an accurate count, but they face an uphill battle.