Data from the United States Census Bureau’s Household Pulse Survey (HPS) provides an opportunity to chart shifts in vaccine hesitancy among Arkansans compared with the United States from early February to July 2021. The information provided is an aggregate of HPS surveys completed between January 6 and February 15 and May 26 and July 5, involving unvaccinated respondents 18-44 and 45 and older. 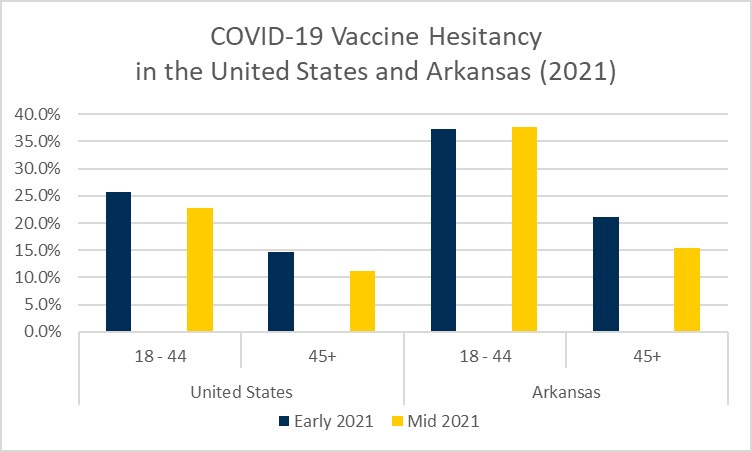 Table 1 shows how vaccine hesitancy (i.e., people who say they are unlikely or very unlikely to receive the vaccine) has changed between early and mid-2021 among unvaccinated respondents in the United States and Arkansas. Nationwide, hesitancy decreased around five percentage points between February and July for those in the 18-44 age cohort and 3 points among respondents 45 and older. However, in Arkansas, the rate of hesitancy in both age groups is considerably higher than the national average. In addition, resistance to vaccines among Arkansans 18-44 even increased slightly during the period monitored.

Participants chose from among ten reasons to explain their reluctance to get a vaccine, and their responses are charted in Tables 2, 3, and 4. Reasons are abbreviated to save space. 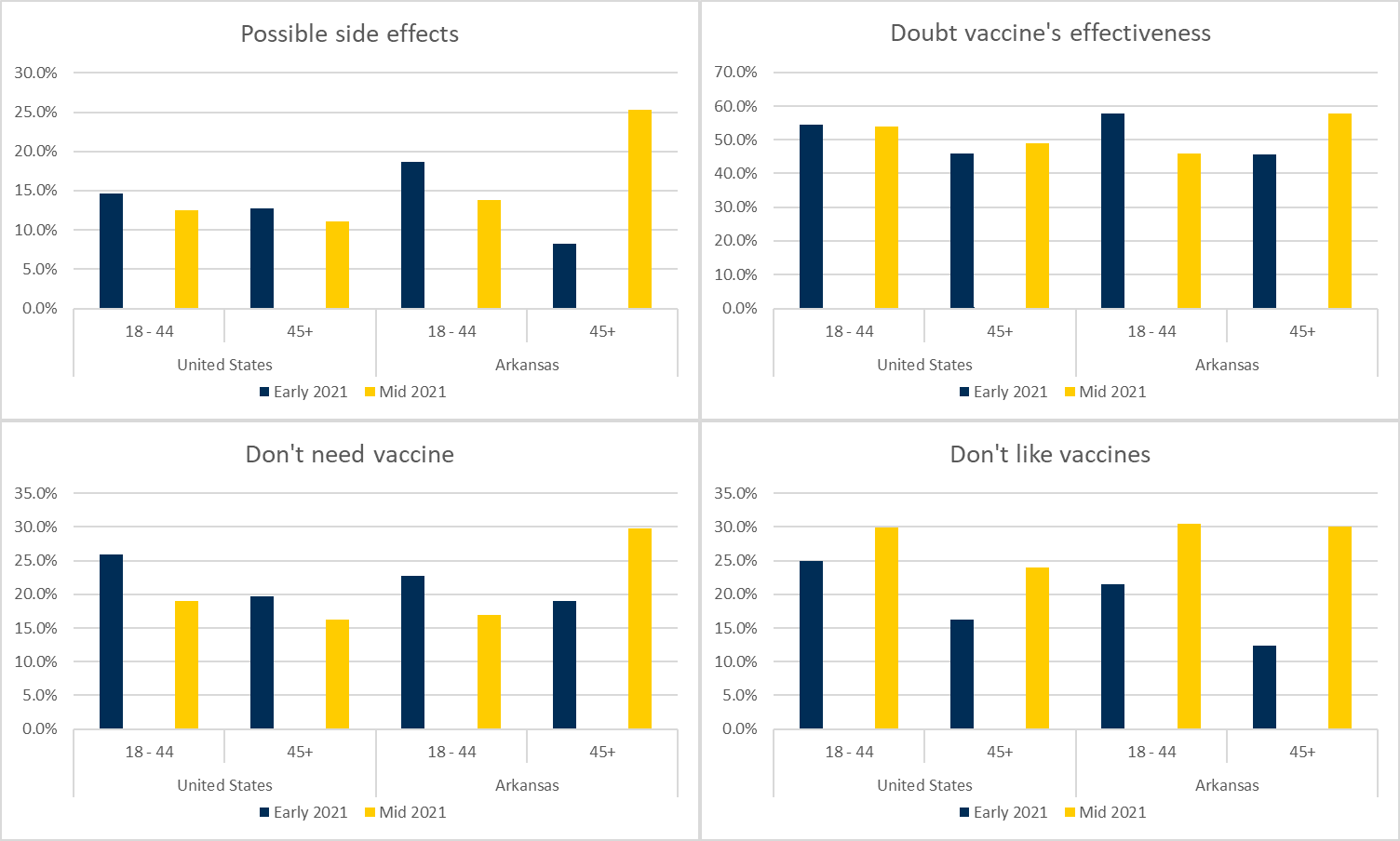 From February to July 2021, the percentage of respondents concerned about possible side effects and those who believe they don’t need a vaccine declined nationally and among Arkansans in the 18-44 age group. However, the percentage of Arkansas respondents 45 and over who chose those two reasons increased substantially during the same period.

For unvaccinated respondents in Arkansas and the U.S., doubts about whether a vaccine will help remain high. Misgivings about the vaccine’s effectiveness for those 45 and older increased slightly from early to mid-2021, dropping somewhat for those 18-44. However, dislike of vaccines grew substantially over the same period, increasing an average of 10 percentage points among all age groups in Arkansas and nationally.

Table 3: Reasons for vaccine hesitancy in the United States and Arkansas in early and mid-2021 compared. (2/3)
Reasons for Hesitancy
• My doctor has not recommended it
• I think other people need it more than I do right now
• I plan to wait and see if it is safe and may get it later
• I am concerned about the cost of a COVID-19 vaccine 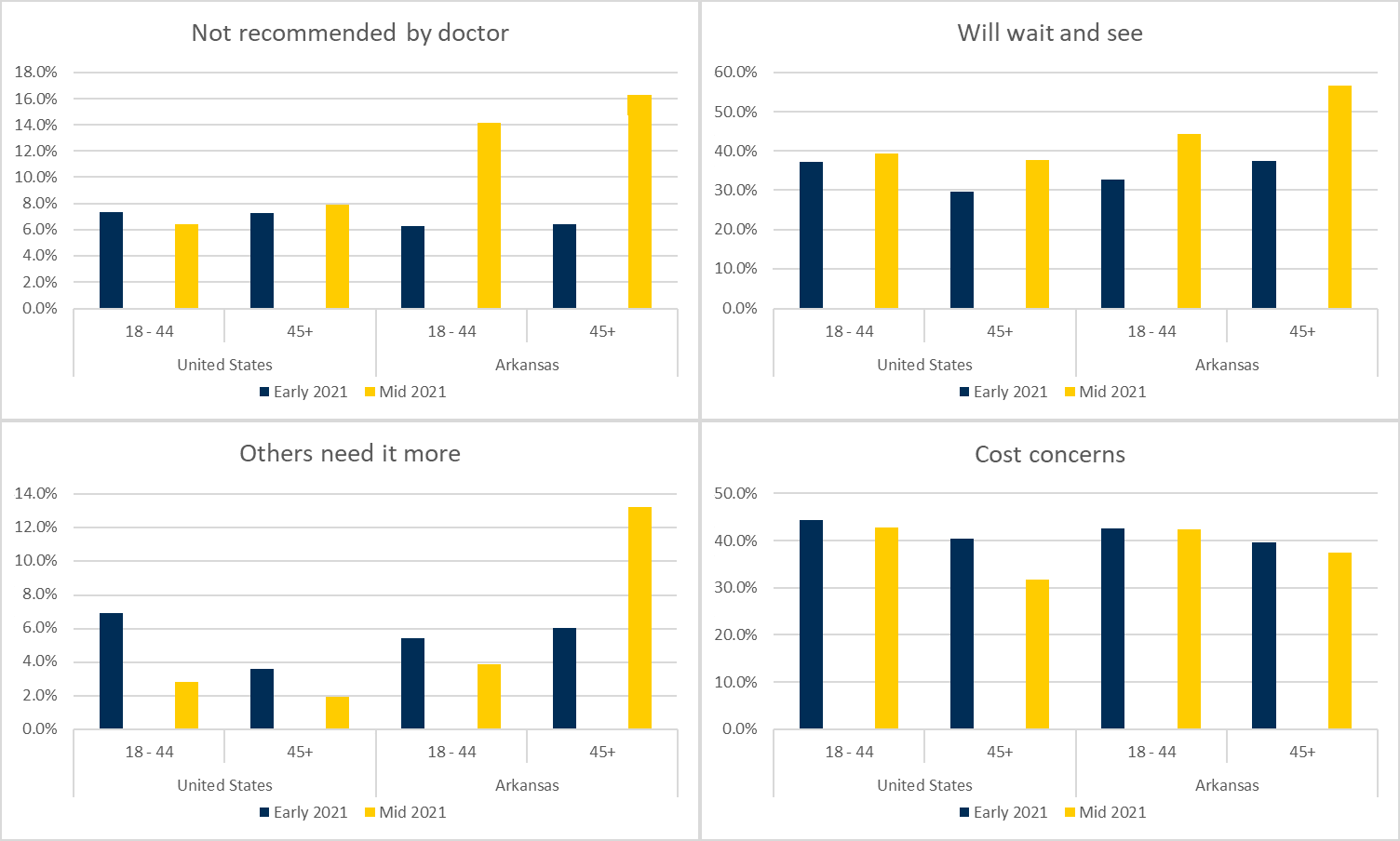 Since February, percentages of respondents who believe that the “vaccine has not been recommended by their doctor” held steady nationally but increased substantially among Arkansans. A “wait and see” attitude toward taking the vaccine along with “doubts about the vaccine’s effectiveness” were the reasons respondents cited most often to explain their hesitancy. Over the six months, the percentage choosing to “wait and see” grew slightly nationwide and increased noticeably among Arkansas’ age groups. This reasoning may reflect general anxiety about taking the vaccine since it has been widely available for several months.
The belief that “others need it more” has decreased among all respondent groups except Arkansans 45 and over, where the percentage citing it more than doubled. Although this response is still low, it contradicts the prevailing trend and raises concerns that 13% of unvaccinated Arkansas respondents over 45 still feel that others need the vaccine more. In addition, worries about the cost of the vaccine have remained high throughout the period, suggesting that many respondents are unaware that COVID-19 vaccines are free. 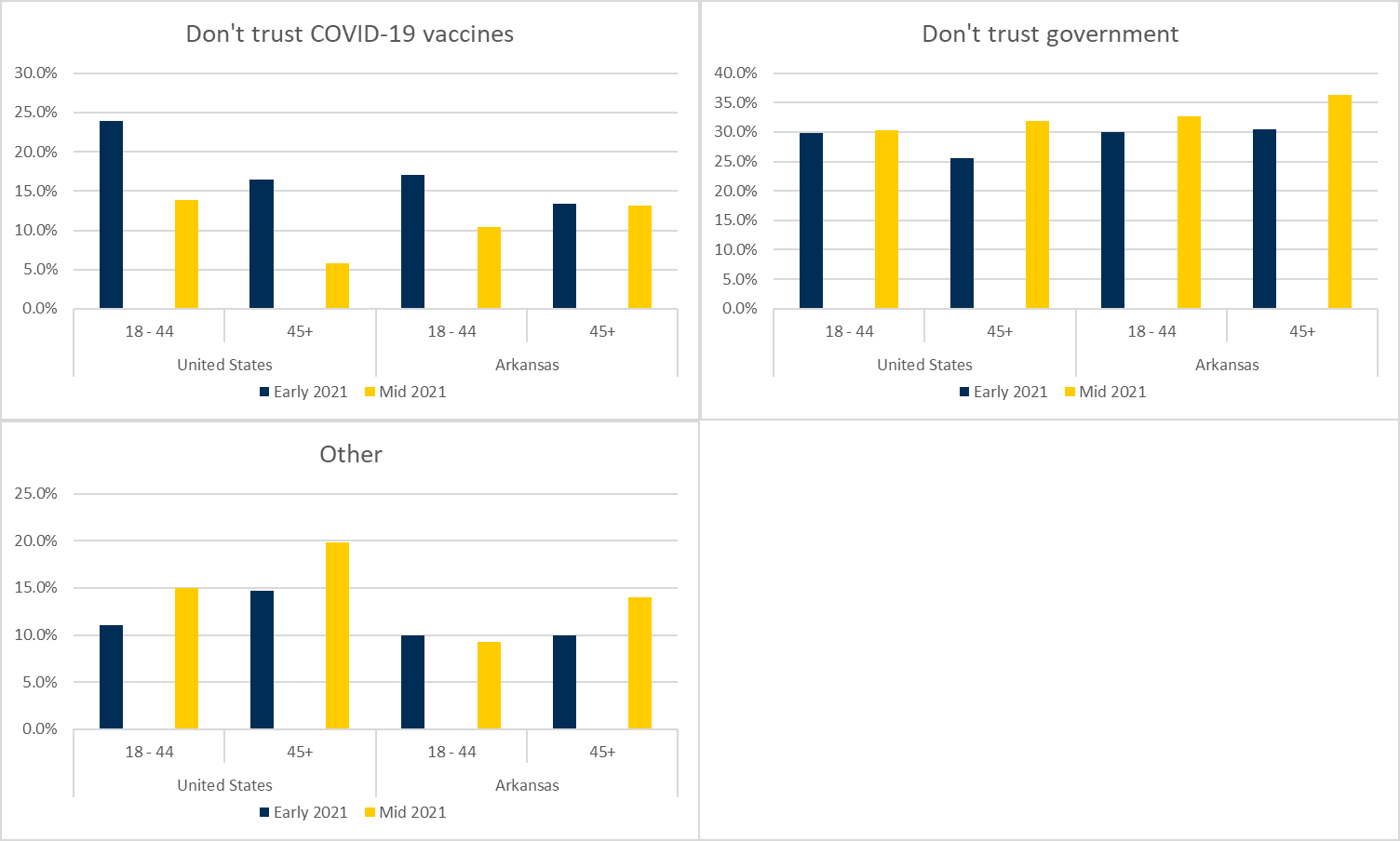 Given the previous responses, it is noteworthy that vaccine distrust among Arkansas and U.S respondents was lower in July than in February. Less surprising is the increase in respondents that “don’t trust the government,” especially among those 45 and over. Suspicion of government and the vaccine should grow as the pool of unvaccinated respondents decreases. The percentages of those citing “other” unnamed causes behind their vaccine hesitancy remained relatively high, particularly in the U.S. where 15% of respondents 18-44, and 20% of those 45 and older, identified “other.”

While the percentage of unvaccinated respondents who worried about possible side effects or believed a vaccine was unneeded decreased since February, the rate of those citing other reasons to avoid a shot remained relatively flat or increased. Little or no growth in an indicator over several months suggests the impact of information campaigns on an ever smaller and presumably more resistant set of unvaccinated respondents.

Changing circumstances should also impact the number of respondents selecting “wait and see” or “my doctor has not recommended it,” as doctors commit to vaccinations and various vaccines receive final FDA approval.